Implications: The manufacturing sector continued to expand in July, though at a slightly slower pace than in June. Gains were broad-based, with seventeen of eighteen industries reporting growth. Although the measure for new orders remains above 60, indicating very strong demand for manufactured goods, it’s clear that the factory sector would be expanding even more rapidly if it weren’t for a slew of factors holding back output. Respondent comments were generally positive about the future, but accompanied by widespread worries about disrupted supply chains, rapidly rising costs for inputs, shortages of raw materials across the board, and employers having trouble filling open positions. These issues have all come together to keep manufacturing activity from rising quickly enough to meet the explosion of demand as the US economy reopens. This was evident in the production index, which fell to 58.4 in July from 60.8 in June. Fortunately, it looks like supply chain problems seem to be easing in certain areas. For example, the index for supplier deliveries (which measures how long it takes to receive orders for inputs) fell for the second month in a row in July, though this measure remains very elevated by historical standards. That said, manufacturers are still struggling to deal with an expanding backlog of orders, with the index for that measure rising to 65.0 in July. Customer inventories continued to shrink rapidly in July as well, as businesses continued to rely on the goods they already had in warehouses due to long lead times. Keep in mind, businesses across the US eventually restocking their shelves will be not only a big source of ongoing demand for manufactured goods, but also a tailwind for GDP growth. One piece of good news in today’s report is that the rate of price growth for inputs slowed, with the prices index falling to 85.7 in July after hitting 92.1 in June, its highest level since 1979. That said, all eighteen industries reported increased prices for raw materials in July. Only two commodities (copper and lumber) were reported lower in price while fifty-two were reported up. Finally, the employment index moved back into expansion territory in July, rising to 52.9. While this is a good start, it’s important to keep in mind that job openings in the manufacturing sector are still twice what they were pre-pandemic, signaling that labor supply issues are holding back output. In other news this morning, construction spending rose 0.1% in June, slightly below the consensus expected gain of 0.4%. The increase in June was largely due to a big gain in home building, which more than offset declines for highways and streets as well as power projects. 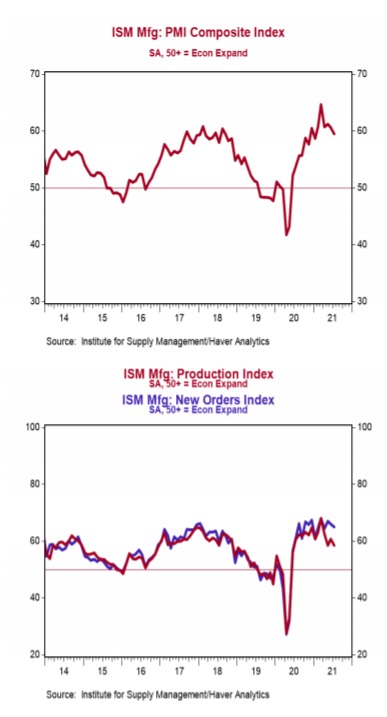